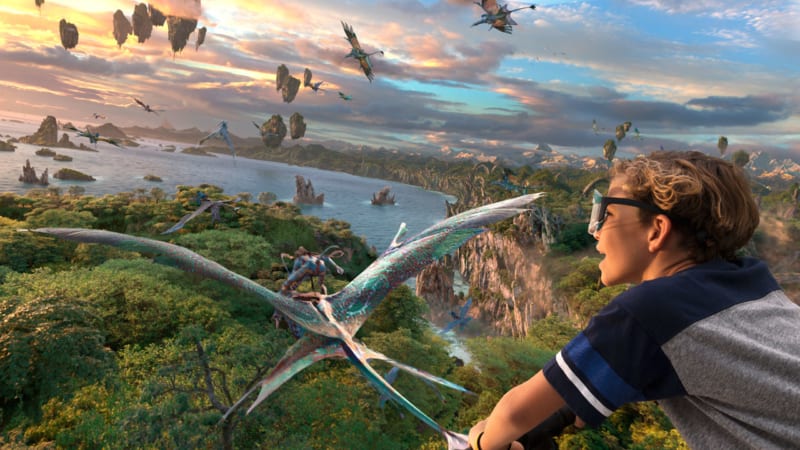 “Our teams continue to raise the bar offering new experiences and adventures leaving guests wondering, ‘how did Disney do that?’” said Bob Chapek, Chairman, Walt Disney Parks and Resorts. “We do all of this for our guests, and we’re thrilled with what they’re telling us about our new lands and attractions. These awards are one more well-deserved recognition for our cast and Imagineers.”

Pandora – The World of Avatar:  Of course the biggest news from Disney parks in 2017 was the opening of Pandora, Disney’s new Avatar themed land in the Animal Kingdom.  Pandora won 2 TEA Awards for outstanding achievement. 1. for “Theme Park Area Development,” and 2. Flight of Passage won for Outstanding Attraction (that’s a no-brainer!)

Guardians of the Galaxy – Mission: BREAKOUT!:  This attraction in Disney California Adventure was also widely talked about in 2017 and even in 2016, because Mission BREAKOUT! replaced one of Disney parks’ most beloved attractions: The Tower of Terror.  While we initially were sad to see Tower of Terror go, we absolutely loved Mission BREAKOUT! and so did TEA as it won the award for “Attraction Reimagining” and the hearts of millions of Disneyland goers.

Frozen Ever After: Not sure why this is getting recognition now considering it opened last year, but nonetheless Frozen Ever After also got recognition in the “Attraction Reimagining” category.  While we still miss Malestrom, it’s still a fun ride and the animatronics are really good…that is when it’s up and running.

“Disney Parks have a long legacy of innovation and storytelling, and our teams continue to push the boundaries from blue sky concept through opening day and beyond,” said Bob Weis, President, Walt Disney Imagineering. “I’m so proud of the Imagineers and Live Entertainment teams who are constantly working to redefine excellence and bring those next level experiences to our guests. It’s an enormous team effort.”

For sure the Disney parks made some great achievements this year, and we can only imagine what else is in store for 2018 and beyond with Toy Story Land and Star Wars Galaxy’s Edge after that!

I want to know what you think about the Disney Parks attractions winning TEA Awards.   Do you think Pandora lived up to the hype?  Let us know in the comments section below!