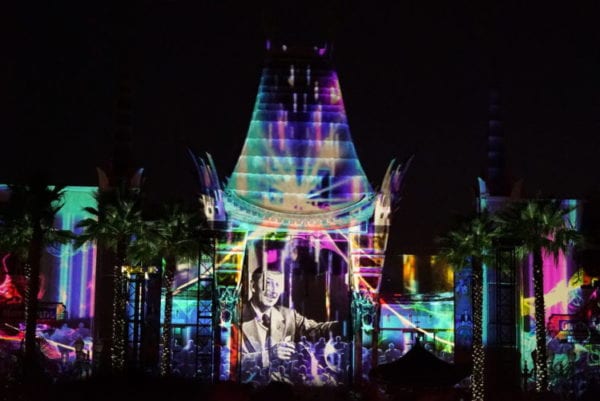 Last night Disney’s Hollywood Studios debuted a brand new nighttime spectacular, the Disney Movie Magic Projection Show.  It uses digital mapping projection technology like what’s already used there in the Star Wars: A Galactic Spectacular show and similar to what’s used in the Magic Kingdom’s Happily Ever After.  It’s sure to bring a smile to the faces of classic Disney fans because it will feature scenes and songs from some of your favorite live-action Disney movies like: Mary Poppins, Pirates of the Caribbean, Indiana Jones, Beauty and the Beast and and even some video of Walt Disney himself!

The 10-minute Disney Movie Magic Projection Show will be on the facade of the Chinese Theater in Hollywood Studios and will be held every evening before Star Wars: A Galactic Spectacular.

This show kind of kind of surprised people because Disney sprung it on us without really saying anything.  That said, all the reviews have been really positive so far and it seems like a show that lovers of Disney films will really enjoy.  At least if gives you another reason to go to Hollywood Studios these days when there aren’t really many during the construction of new lands there.

You can get a look at the show here thanks to LaughingPlace.com

I can’t wait to check it out myself!

I want to know what you think about the new Disney Movie Magic Projection Show.  Have you got a chance to see it yet?  What did you think?  If not, are you going to see it on your next visit to Disney World?  Let us know in the comments section below!

What to Know About Pandora The World of Avatar Opening
← Previous
Disneyland Wifi Now Available in Limited Locations
Next →
Click here to cancel reply.