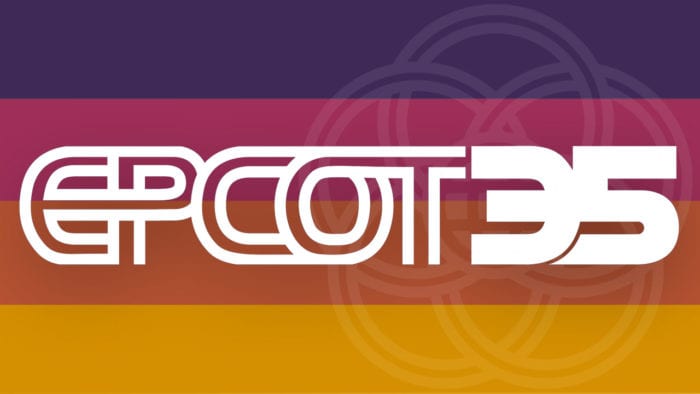 Just over one week away Disney has announced its Epcot 35th Anniversary plans with us!  The festivities will be all day long on Sunday October 1st right there in Epcot!  Check out what’s being planned:

Commemorative Guide Map – Make sure to pick up your special commemorative Epcot Guidemap and Times Guide, which will be available at the park’s Main Entrance, at International Gateway and Guest Relations.

Anniversary Celebration – There’s going to be a special celebration held at the Fountain View stage at 10:01 a.m which will feature World Showcase staples Mariachi Cobre and Voices of Liberty.

Exclusive Anniversary Merchandise – One of the things I’m looking most forward to is the special 35th anniversary merchandise as a part of the “I Was There” collection which has been specifically designed for this year’s milestone.  Items in the collection will be available only at a “pop-up” shop (which will be open for one day only/while supplies last), located just past the Art of Disney location at Epcot on October 1. Additional Epcot 35th Anniversary logo merchandise will be available in select merchandise locations at the park, such as Mouse Gear and on the Shop Disney Parks app.

If you were at D23 Expo in July, you may have noticed that a few rumored announcements were left out.  We already know about the Guardians of the Galaxy Coaster and Ratatouille.  But a Journey Into Imagination replacement, a New World Showcase Country like Spain or Brazil perhaps coming, and a replacement to the aforementioned IllumiNations all topped the list of things were expected to hear about but didn’t.  Well it has been rumored that they were holding off a bit and we could find out about some of these new announcements on October 1st!  Just another reason to be there and find out, or at least stay by your computer!

I want to know what you think about the Epcot 35th Anniversary plans.  Are you going to be there for the celebration?  What are you most looking forward to?  What other announcements would you like to hear?  Let us know in the comments section below!

Construction Has Begun on the Ratatouille Attraction in Epcot
← Previous
Coach Coming to Disney Springs
Next →
Click here to cancel reply.