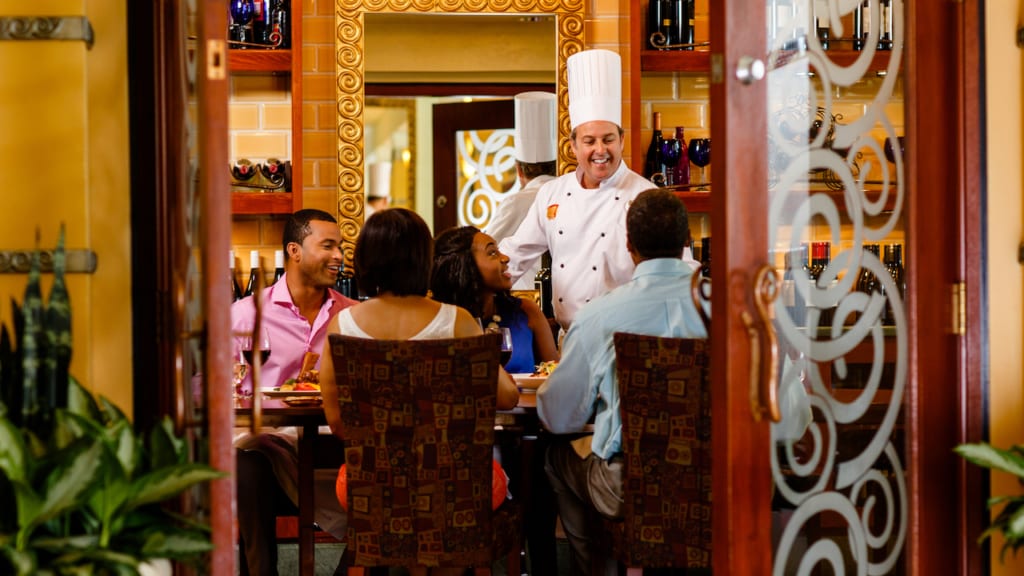 Disney has been continuing to offer more unique dining experiences to its guests year after year (I for one am not complaining) and has announced that the “Delicious Disney, A Chef Series” is returning to Walt Disney world again in 2017.

Basically this is an opportunity for guests to be able to enjoy a meal prepared personally for them by one of the many award-winning chefs from the Walt Disney World Resort.  All meals will be uniquely inspired with food and wine pairings created to showcase their personal talents.  The theme of this year’s “Delicious Disney, A Chef Series” will be: “Storytelling with Food.”

Not only will this be any foodie’s dream as these meals are sure to amaze, but guests will have the opportunity to meet and mingle with the individual chefs who prepare everything.  Dinners will be on the intimate side with a limit of approximately 60 guests per location.  There will be 9 dinners total with some of the locations including: Cinderella’s Royal Table in the Magic Kingdom, Markham’s at Golden Oak, Be Our Guest Restaurant in the Magic Kingdom and backstage at the Walt Disney World Tree Farm.  The schedule is here below:

July 19th at 6:30pm
Enjoy the exotic and exquisite tastes of a journey Under the Sea
Featuring Flying Fish’s Timothy Majoras and Team
Location Markham’s at Golden Oak

August 16th at 6:30pm
A Walk around the World with Disney
Featuring Culinary Director Edwin Wronski and the Flavor Lab Team
Location Markham’s at Golden Oak*

December 6th at 6:30pm
Farm to Table Dining Experience
Featuring a collaboration of our Disney Chefs
Location The Tree Farm

I would recommend not waiting at all if you are interested as the places are sure to fill up fast.  I love this idea as the more culinary options guests have the better imo.  Can’t wait to see how this year’s Delicious Disney, A Chef Series shapes up and can’t wait to here your experiences if you happen to go!

I want to know what you think about the “Delicious Disney, A Chef Series” returning in 2017.  Do you like the idea of a personalized meal by an award winning chef?  Would you like to interact with them?  Let us know in the comments section below! 🙂

REVIEW: Le Cellier in Epcot's Canada Pavilion
← Previous
Pandora The World of Avatar Opening in May?
Next →
Click here to cancel reply.