It’s being reported that the child’s body has been found, and found in tact.  It seems drowning was the cause of death.  He was located in the lagoon near Building 9 at the Grand Floridian Resort.  That is the closest building to where the boy was when he was attacked.  We also now know the boy’s name: Lane Graves from Elk Horn, Nebraska.

In a statement, George A. Kalogridis, the president of the Walt Disney World resort said, “there are no words to convey the profound sorry we feel for the family and their unimaginable loss.

We are devastated and heartbroken by this tragic accident and are doing what we can to help the family during this difficult time. On behalf of everyone at Disney, we offer our deepest sympathies.”

Florida sheriff says ‘no question’ 2-year old taken by alligator is dead.  They are continuing their search for now in hopes of bringing closure to the family.

It’s been reported that Disney World has shut down all the beaches on property as the search for the little boy continues..

So far the authorities have still not been able to locate the body of the 2 year old boy taken by the alligator last night.  In the ongoing search for the boy, there have been 4 alligators pulled out of the Seven Seas Lagoon so far.  The alligators were euthanized to be analyzed, but so far none of them show evidence of having taken the child.

Jeff Williamson, a spokesman for the Orange County Sheriff’s Office, they continued through the night looking for the boy.  The boats are equipt with sonar equipment, an alligator trapper and a 10-member dive team on stand-by.  He said they will call it off when they call it off, but now there is no talk of that.

It’s already been a terrible week for the Orlando Florida area with the shooting Orlando, and the bad news keeps coming in…

At 9:16pm on Tuesday night, a 2 year old child was attacked and dragged into the water by an alligator at Disney’s Grand Floridian Resort.  According to the Orange County Sheriff in his statement, the little boy was wading in the water along the edge of the Seen Seas Lagoon, when the alligator snatched the boy.  The boy’s father entered the water in a desperate attempt to free the boy from the alligator’s jaw, but was unsuccessful in his attempt. 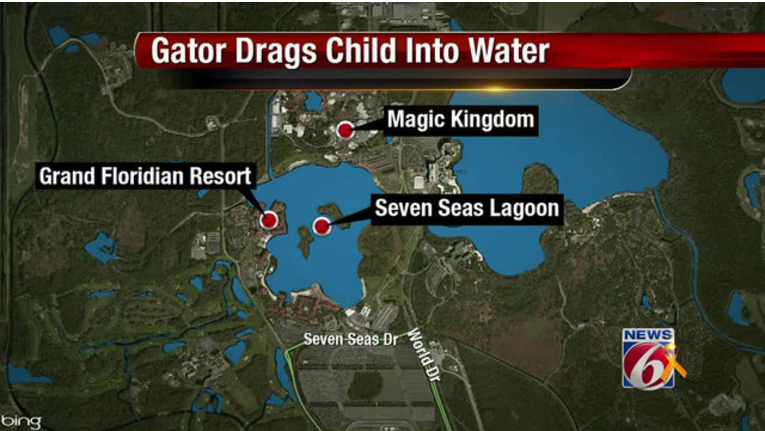 The child was “wading just in the water along the lake’s edge at the time that the alligator attack,” Orange County Sheriff Jerry Demings said.  “The father actually went into the water to wrestle his son from the grips of the alligator,” he said.  The father suffered only minor injuries in his attempt.  The gator is reportedly between 4-7 feet in length.

There were a few eyewitnesses to the alligator attack and have provided police with information about the incident.  Local authorities have been doing all they can in an attempt to rescue the child, sending in: trappers, divers, marine units, sonar and helicopters, but all attempts so far to find the child have been in vain.  “The sad reality of it is it’s been several hours and we’re not likely going to recover a live body,” Demings said.  He said they will not stop their search until the body of the child is found. 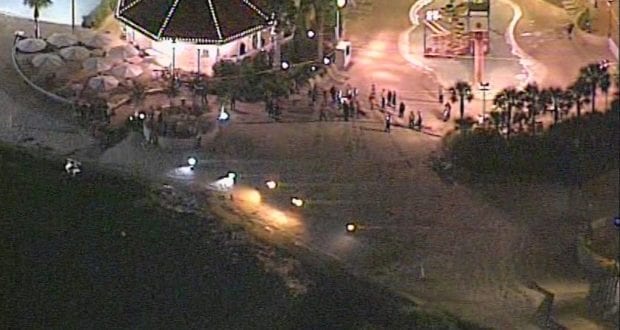 The Florida Department of Fish and Wildlife is conducting a separate investigation into the even and has supplied an alligator trapper to help in the search.  “We’re putting every effort into locating the child and trapping this alligator,” Officer Chad Weber said.  “We’ll be here with them until there’s a resolution.”

The family of 4 is visiting from Nebraska and arrived in Disney World on Sunday.  The alligator attack happened during the Grand Floridian’s Movie Under the Stars, where the resort plays Disney films for the guests to watch. Disney is cooperating with the investigation as much as they can.  “Everyone here at the Walt Disney World Resort is devastated by this tragic accident.  Out thought are with the family.  We are helping the family and doing everything we can to assist law enforcement,” said a Disney spokesperson.

Some have questioned the safety measures Disney takes regarding alligators, but I think they do an excellent job in preventing these kind of tragedies.  For example there are signs on the beach at the Grand Floridian and other resorts that say: “No Swimming”, and it’s precisely for this reason.  Everyone knows Walt Disney World is positioned right in the middle of a huge swamp basically, and any lake you go to in Florida most likely has alligators in it.  Disney tries to remove any alligator from it’s properties that is larger than 4 feet in length, and it does a great job, but obviously it’s almost impossible to catch every single one.

First Official Trailer for Pete's Dragon Movie
← Previous
The Parents or Disney - Who's Responsible for the Boy Being Taken by the Alligator?
Next →
Click here to cancel reply.

[…] parents of the boy who was killed last month at the Grand Floridian resort in Disney World have made a statement saying that they will not be suing Disney for damages.  This comes a bit of […]

[…] As if this story needed more twists and turns, according to the Orlando Sentinal Disney firefighters were warned to stop feeding gators at one of the nearby resort fire stations two months before the attack on 2 year-old Lane Graves on the beach of the Grand Floridian on June 14th. […]

[…] couple of weeks ago after the alligator attack of a 2 year old boy in the Seven Seas Lagoon Disney decided to close all of it’s beaches until they got the situation under control.  […]

[…] light of the alligator attack that killed 2 year old Lane Grave on Tuesday night, The Walt Disney World Resort did confirm they will be adding new signs warning of […]

[…] the tragedy of the boy who was grabbed and killed by the alligator in the Seven Seas Lagoon at the Grand Floridian Resort, the popular Jungle Cruise ride in […]