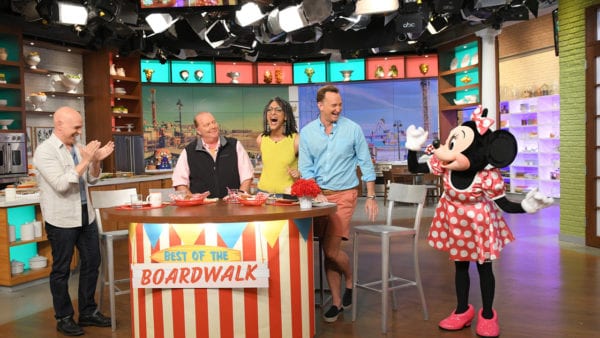 For the third year in a row we’re happy to tel you about ABC’s The Chew Returning for 2017 Epcot Food and Wine Festival to tape five shows from the popular Disney World festival on Oct 9-13.

Just like last year The Chew will host a live audience with on-stage cooking and plenty of stories about the food all around Walt Disney World.  Epcot Vice President Melissa Valiquette said: “It’s magical to see our Epcot stage light up as the show’s celebrated hosts cook, dish and entertain each live audience of festival guests.”

Also making a return to this years Epcot Food and Wine Festival is the popular “Earth Eats Marketplace” (last year it was called The CHEW Collective) which features food inspired by the TV program.  The menu as it is looks exactly the same as last year, which isn’t bad because it ranked on my Top 10 2016 Food and Wine Marketplaces List.

As I said last year it was all good, especially the Peanut Butter and White Chocolate Mousse which was super rich and creamy.  Read my Review of The CHEW Collective Marketplace here

And when you go to the 2017 Epcot Food and Wine Festival you’ll be able to see screenings of The Chew, show highlights and cooking tips in the Festival Center.

The festival this year has a record 75 days and runs from August 31st to November 13, while the broadcast of ABC’s The Chew from Epcot will air at 1pm EDT October 9-13, be sure to check it out!  Check out the video to learn more about the Magical Culinary Adventure Sweepstakes here:

I want to know what you think about The Chew Returning for 2017 Epcot Food and Wine.  Did you watch The Chew from the Epcot Food and Wine Festival last year?  Are you going to be at the festival this year?  Let us know in the comments section below!

Big Changes Coming to Pirates of the Caribbean in Disney Parks
← Previous
Watch the Replay of The Music of Pixar Live!
Next →
Click here to cancel reply.

I'm so very excited that The Chew will be airing a third year this fall at the Epcot Center in Disney. I would be even more excited to be there with The Chew if I were one of the lucky winners! ? The first week in October is such a beautiful time of the year and what better place to be? The only time I was in Disney in Florida was the year the Epcot Center was going to open that fall. (I was there in August.) Winning the trip would mean a lot to me! ?

yeah I hear ya, I would love to win too!! It will be a great time at Food and Wine this year!! :)