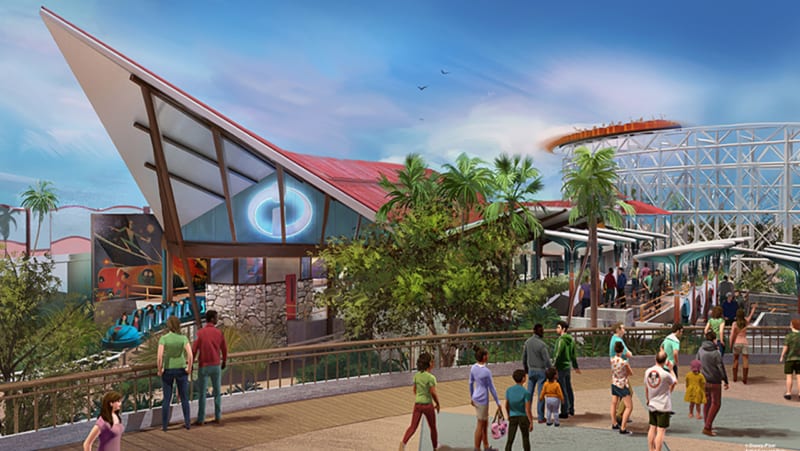 As you know Pixar Fest is going on right now at the Disneyland Resort, and a part of that is the new Pixar Pier which is opening June 23.  We’ve already heard about some of the details including all-new dining options and the remodeled “Incredicoaster” which are all really exciting.  Today Disney announced 4 New Pixar Pier Neighborhoods coming to Disney California Adventure to make up this newly reimagined land.  Let’s take a look:

Toy Story Boardwalk – After Incredibles Park, the theming on Pixar Pier changes to “Toy Story.”  Not exactly on the same scale as Toy Story Land in Hollywood Studios is, but you will still feel like you have been shrunk to the size of a toy.  Here there will be a couple of attractions: “Toy Story Midway Mania!” and “Jessie’s Critter Carousel” which is opening in 2019.  There’s also going to be a fun-sized Zurg—perfect for photo ops! There will be 2 Dining options on the Toy Story Boardwalk: Poultry Palace, a fun place inspired by Pixar’s short, “Toy Story Toon: Small Fry” and Señor Buzz Churros, where you can find these classic Disneyland snacks.

Pixar Promenade – This area is inspired by classic turn-of-the-century California boardwalks and will have a mix of many Pixar character favorites.  You know that Mickey’s Big Wheel is getting a make-over and will now be called the Pixar Pal-A-Roune.  Mickey’s face is staying on the wheel but each individual gondola on the wheel will have a different set of Pixar characters too.

The famous boardwalk games you’re used to on the Promenade are staying and include:  Heimlich’s Candy Corn Toss, Wall-E Space Race, La Luna Star Catcher and Bullseye Stallion Stampede as well as a band stage.  Dining options include:  Bing Bong’s Sweet Stuff ( a confectionery offering saltwater taffy and rainbow cotton candyand) and Angry Dogs (hot dogs and the like)

Edna Mode from ‘The Incredibles’ Coming to Disneyland and Disney World Disney This Summer
← Previous
Comcast Trying to Buy Fox Before Disney Can Finish the Deal
Next →
Click here to cancel reply.