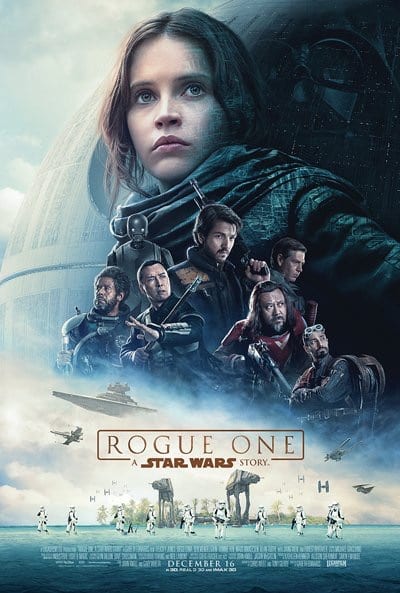 Rogue One: A Star Wars Story opened up this weekend with incredible success.  The first Star Wars movie outside of the normal numbered trilogy earned $155 Million at the Domestic Box Office in the U.S. and grossed a whopping $290 worldwide in just it’s first weekend.  That success was the fourth largest December weekend opening in history, and the twelfth largest of all-time, the December record holder obviously being The Force Awakens which grossed a staggering $248 million in the domestic box office alone its first weekend.

Critics are raving about Rogue One: A Star Wars Story so far, with very few negative reviews.  Rotten Tomatoes gives it an 84% approval rating and IDMB.com has it at 8.3 stars out of 10 which is quite high for them.  Overall you can consider this a smashing success.  You can read my Rogue One Review here.  I’ve seen it 2 times so far and loving every second!

The only thing that might put somewhat of a cap on Rogue One’s box office success in my opinion will be its intense battle scenes.  While it’s not nearly as graphic as many movies are today, it still may not be appropriate and may scare some children because of a few scary scenes and overall intense violence.  Therefore I can see some parents not wanting to bring their children to the movies and will go alone.  We’ll see in the coming weeks how much success Rogue One has.

I want to know what you think about Rogue One First Weekend Box Office success.  How high do you think it will top out at?  Will you take your children to see it?   Let us know in the comments section below! 🙂