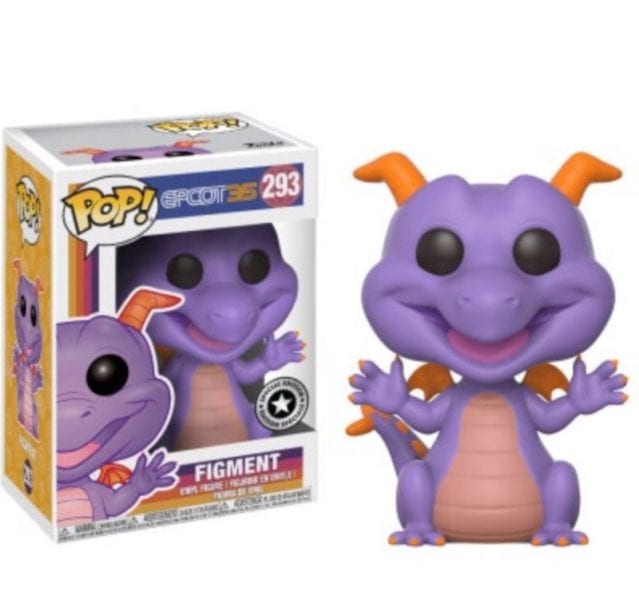 According to DisKingdom.com the rumors of a Figment Pop Vinyl coming out for Epcot’s 35th Anniversary were true and they will be in Epcot on Sunday Oct 1st.  The “Figment” Pop Vinyl by Funko has been expected as images of it were leaked online and have been traveling the internet at the speed of light!  He looks super cute and it’s fitting seeing as he is the unofficial mascot of Epcot after all!

If you are going to Epcot on Oct 1st for the 35th Anniversary celebration then you can pick one up at Mouse Gears, Plaza Towers and World Traveller stores in the park.  the Figment Pop Vinyl will be priced at $19.99, and will be exclusive to the park and in limited quantities.

This could be following the trend of hot Disney merchandise lately such as the Rose Gold Minnie Ears that have been all the rage, and the Beauty and the Beast Enchanted Rose Tumblers that went for crazy amounts for the release of the film earlier this year.  There’s also going to be a bunch of other Epcot 35th ‘I Was There’ Limited Edition merchandise available so if you want to get some, you better get there and get there early!

Of course besides shopping Disney has some big plans in store for the Epcot’s 35th including a special Anniversary Celebration, Guide Map, Illuminations Fireworks show.  It’s going to be a great day so stay tuned for more updates!

I want to know what you think about the Figment Pop Vinyl coming for the Epcot 35th Anniversary Celebration.  Are you going to get one on Oct 1st?  What else would you like to see released for the 35th?  Let us know in the comments section below!