Donald Trump Will Have a Speaking Role in Hall of Presidents 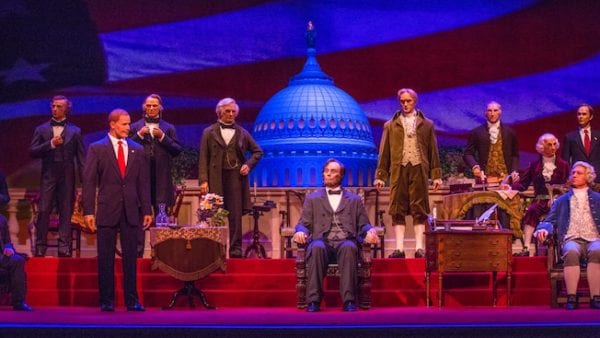 According to My News 13, we now have confirmation that Donald Trump will have a speaking role in Hall of Presidents, the iconic Magic Kingdom attraction.

There has been a lot of speculation about what role President Trump would have in the attraction after it was confirmed he would at least be in it.  Some thought he might have a silent Animatronic even though every president since Bill Clinton has had a speaking role.

Disney however finally made a statement on this controversial inclusion to the Hall of Presidents: “The same thing that we’ve done with other presidents, is the same plan we have for President Trump,” said Jacquee Wahler, vice president of communications.

The Hall of Presidents has been closed since January for refurbishment, and the original plan was to have it reopen by June 29th.  Citing technical difficulties that date is no longer feasible and Disney is now shooting for a “Late 2017” opening date.

So now we have our answer…

I want to know what you think about Donald Trump having a speaking role in the Hall of Presidents?  Do you think he should have been included?  Let us know in the comments section below!

He is our president. Time to accept it and move on. Many people didn't like other presidents, I don't care for obama, yet they all deserved our respect. I am sure they will have a nice speech prepared for him.

I would much prefer a silent Trump. Just my opionion - but he doesnt need to speak at all

He is the President of the United States of America.. We need to stand together and make our nation one nation. Reguardless if some voted for him, or not, we need to be Americans and work together to make our country united, and stop fighting amongst each other.

I still sorry but what on earth will they have him say??

hahaha, no clue, I hope they have his hair move though! ;)