Disneyland Railroad is Back After a Long Refurbishment 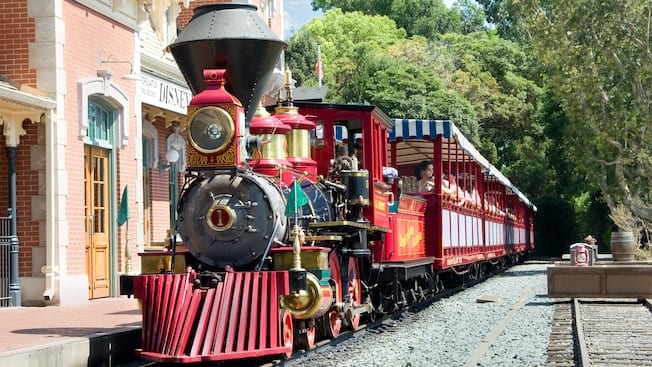 We’ve been waiting patiently for its return, and finally today the Disneyland Railroad is Back.  This completes the long refurbishment of the Disneyland Railroad and also the whole Rivers of America area, both of which were closed due to the Star Wars Galaxy’s Edge construction.  Now it has a a beautiful new waterfront area and elevated trestle over the water for the trains to pass over.

There are five new beautiful waterfalls in the new Columbia Gorge section.  As in typical Disney fashion the area inspired by four of America’s majestic rivers – the Mississippi, the Columbia, the Missouri and the Rio Grande were created down to the last detail, everything from indigenous rock formations, natural forests and wildlife, and the waterfalls.  There are also some real nice touches along the railroad as guests will hear singing birds, an Indian Chief’s horse, a Riverboat captain’s voice, plus amazing music fitting each area.

Also getting refreshed are the Grand Canyon and Primeval World dioramas.  The Grand Canyon section is now full of life with re-imagineered plant and animal life and some fun surprises along the way.  The same with Primeval World, whose sets have been repainted and been given new lighting and effects.

Everyone was there, even Pixar’s John Lasseter was at the controls of the Disneyland Railroad.  Maybe it was better we missed that first ride around!

I think that in both Disneyland and Walt Disney World the Railroad is a severely underrated attraction, that unfortunately because of today’s FastPass+ world end up skipping because they aren’t as “exciting” as some others.  Don’t forget that the whole reason the Disney parks exist are because of Walt’s love for trains, and this is a beautiful tribute to Walt and his passion.  Take the time for a spin around Disneyland the next time you go.