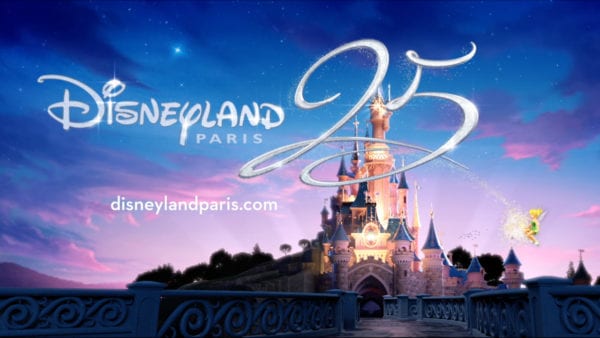 It’s hard to believe it’s already been 2 1/2 decades since Disney made the move to Europe, and they have a lot of special things planned for the Disneyland Paris 25th Anniversary Celebration.  If you haven’t ever been to Disneyland Paris then now might be a good time to go seeing all the festivities are coming.

The cast of nearly 15,000 are preparing for the big day which starts March 26th.  There will be updates to your favorite attractions, shows, and special merchandise, food and drink.  Here’s what you can look forward to:

Even though it’s much smaller than Walt Disney World, if you haven’t been before it’s still worth the trip at least once.  The Castle in Disneyland Paris is amazing, and so is the Dragon that lives underneath!  The redesigned Hyperspace Mountain sounds really cool too, as well as  Phantom Manor (Haunted Mansion), Ratatouille, and the best version of Pirates of the Caribbean in the world(the traditional ones, not counting the Shanghai version.)  Also Disneyland Paris has two awesome Spectaculars/Shows in Disney Magic on Parade and Disney Dreams which are totally worth seeing.

It’s going to be a great celebration, we’ll keep you updated on all the events and news taking place!