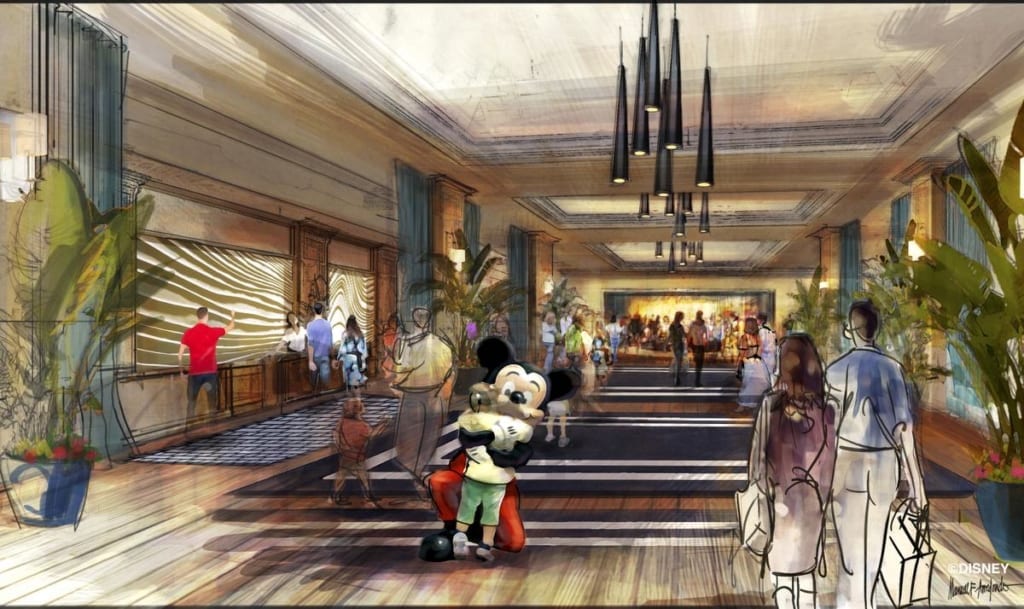 Concept art for the lobby at the new luxury hotel at the Disneyland Resort.

As reported by the OC Register, The Walt Disney Company has filed paperwork to the city of Anaheim to build a brand new Luxury Hotel at the Disneyland Resort.  The hotel will have over 700 rooms and be situated on a 10-acre property at the north end of the Downtown Disney parking lot and will include it’s own parking structure.  Plans are to break ground on this luxury resort in 2018 with a target opening date of 2021.  It’s expected to be the new flagship hotel of the Disneyland Resort.  (UPDATE): The plans for the new luxury hotel in Disneyland have changed so check out the new project here. 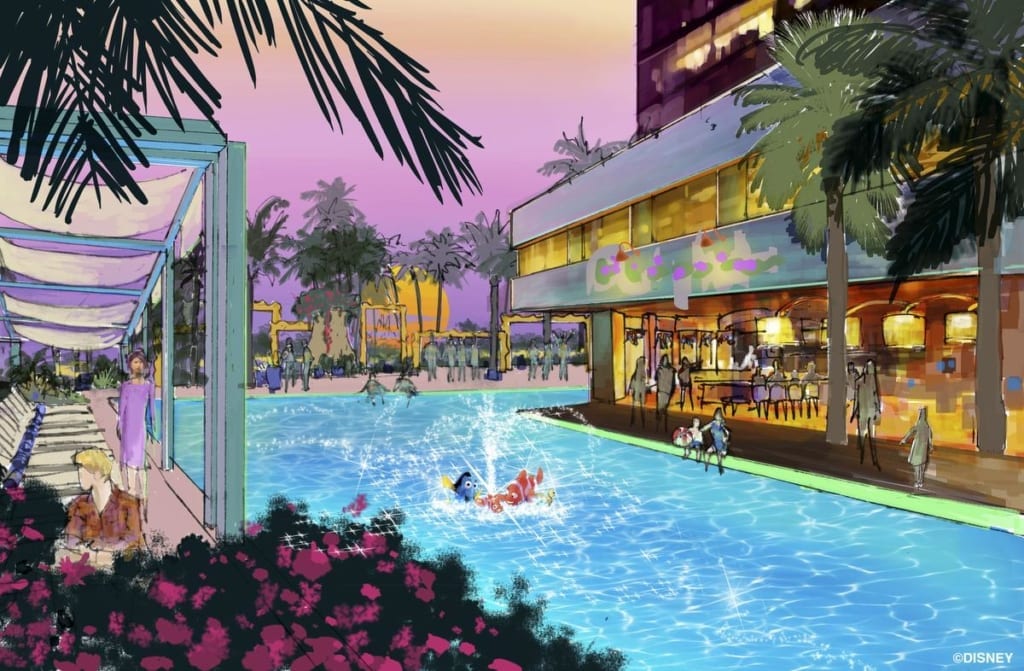 Concept art of the swimming pool area at the new luxury hotel at the Disneyland Resort.

This place sounds awesome: There will be 2 pools, a fitness facility, concierge and a kid’s play area.  Not to mention my favorite part: an upscale rooftop restaurant with great views of the Disneyland fireworks over Sleeping Beauty Castle…not bad!  That’s where you will find me for sure!  Walt Disney Imagineers will be designing the new hotel, although as of now there is no theme yet chosen. 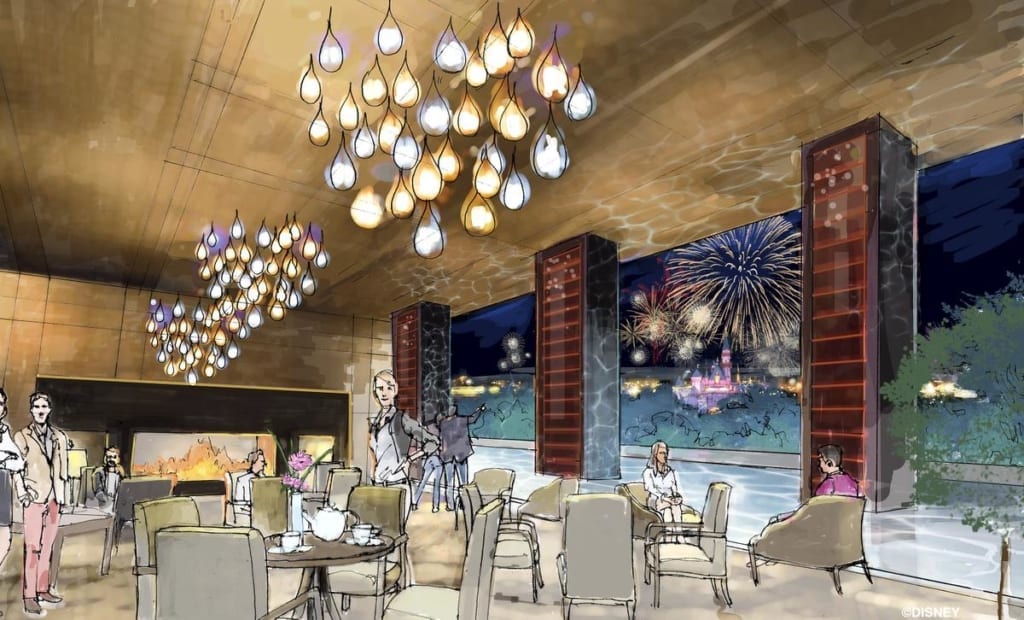 Concept art of the rooftop restaurant, where I’ll be spending most of my time! 🙂

“At this time, we’re getting about $35,000 in property tax from the Downtown Disney parking lot,” Councilwoman Lucille Kring said. “If the Disney luxury hotel is built, we will get multiple times the revenue for the city. …That’s entirely new income and we’re always trying to pay down our debt and provide more services for the residents.”

The hotel when it opens will be the 4th Disney hotel in Disneyland and first new hotel in 20 years.  With the expected increase in attendance from the creation of “Star Wars Land“, this will help absorb some of those customers and keep them on property.  The timing also seems right with the opening of that land right around the same time if not slightly before the hotel opens.

When they say luxury, they aren’t messing around.  This hotel will be targeting those who want a true four-diamond rated experience and will cost around $450 per night.  In order to receive a four-diamond rating, Disney needs to spend at least $225,000 per guest room, including $30,000 in furniture, fixtures and equipment in each room.  That’s no small number!  I can only imagine how awesome they will be decorated and I can’t wait to see them!  City officials in Anaheim have argued that they need more luxury properties, and according to their research there is room for about 2,500 luxury rooms in the area.

Disneyland spokeswoman Suzi Brown said: “This new flagship hotel would create thousands of jobs and benefit Anaheim with more than $750 million in additional tax revenue over the next four decades, while helping the city reach its stated goal of attracting more high-end visitors.” 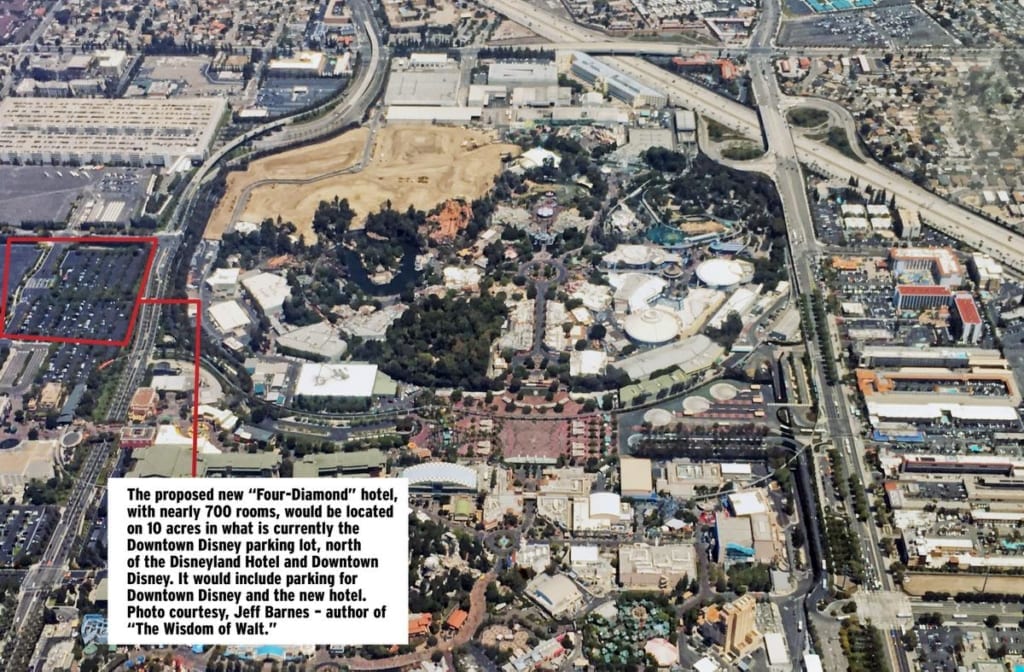 An overhead view of the Disneyland Resort. The new luxury “Four-Diamond” hotel would be on 10 acres in what is currently the main Downtown Disney parking lot.

We don’t know exactly how much it will cost, but we do know that the Walt Disney Company has already made an agreement with the city of Anaheim to spend at least $2 Billion in the next 10 years to keep their taxes low.  This deal includes the “Star Wars Land” addition as well as the new parking structure and nearby transit center.

I can’t wait to hear more news about this place, let me know what you think of the new luxury hotel in the comments section below….

New Electrical Parade Lunch Package at Tony's Town Square Restaurant
← Previous
Go Behind the Scenes of Soarin Around the World
Next →
Click here to cancel reply.

[…] Disneyland to build new luxury hotel – Probably the biggest news of the week was the announcement that there’s a new luxury hotel coming to the Disneyland Resort in California.  It’s going to be amazing, 700 rooms, 2 pools and an upscale rooftop restaurant!!  Count me in!  They will break ground in 2018 with an estimated opening of 2021. […]