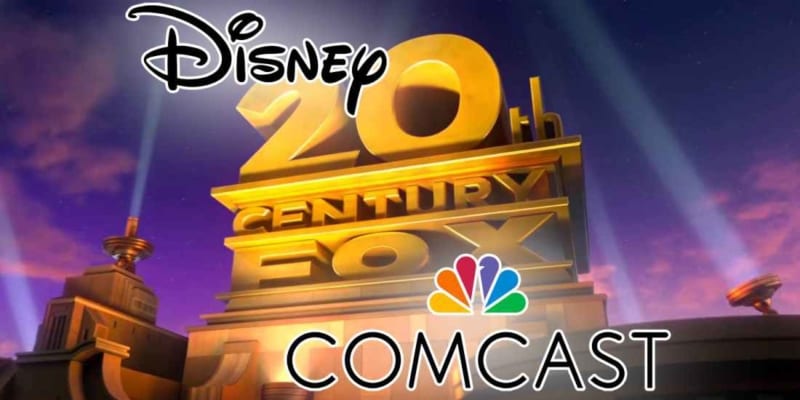 The Walt Disney Company has just increased its bid for the Twenty-First Century Fox assets to $71 Billion.  That’s an almost $20 Billion increase over the previous offer of $52.4 Billion.  This new offer from Disney also includes a significant amount of cash, and raises the per share acquisition price to $38, up from $28 in Disney’s original offer.  That’s also more than the $35 per share that all-cash offer Comcast made just days ago.

Fox President Rupert Murdoch responded to Disney’s latest offer saying it’s a superior one than what was offered by Comcast last week.  “We remain convinced that the combination of [Fox’s] iconic assets, brands and franchises with Disney’s will create one of the greatest, most innovative companies in the world.”  According to this new deal the Fox shareholders can elect to receive either cash or stock, while the assets Disney is acquiring remain the same.

It seems that Fox really wants to make this deal happen with Disney and not Comcast and that’s very clear.  The only question is now will Comcast stop in its efforts to acquire Fox or will they continue to pursue.  Either way it doesn’t seem like Disney has any intentions of losing Fox and significantly desires the Fox assets, and Fox wants to sell to Disney.

Here is the official release:

Twenty-First Century Fox, Inc. (“21CF”) (NASDAQ: FOXA, FOX) announced today that it has entered into an amended and restated merger agreement with The Walt Disney Company (“Disney”) (NYSE: DIS) pursuant to which Disney has agreed to acquire for a price of $38 per 21CF share the same businesses Disney agreed to acquire under the previously announced merger agreement between 21CF and Disney (the “Disney Merger Agreement”). This price represents a significant increase over the purchase price of approximately $28 per share included in the Disney Merger Agreement when it was announced in December 2017. The amended and restated Disney Merger Agreement offers a package of consideration, flexibility and deal certainty enhancements that is superior to the proposal made by the Comcast Corporation on June 13, 2018.

Under the amended and restated Disney Merger Agreement, Disney would acquire those businesses on substantially the same terms, except that, among other things, Disney’s offer allows 21CF stockholders to elect to receive their consideration, on a value equalized basis, in the form of cash or stock, subject to 50/50 proration. The collar on the stock consideration will ensure that 21st Century Fox shareholders will receive a number of Disney shares equal to $38 in value if the average Disney stock price at closing is between $93.53 and $114.32.

“We are extremely proud of the businesses we have built at 21st Century Fox, and firmly believe that this combination with Disney will unlock even more value for shareholders as the new Disney continues to set the pace at a dynamic time for our industry,” said Rupert Murdoch, Executive Chairman of 21st Century Fox. “We remain convinced that the combination of 21CF’s iconic assets, brands and franchises with Disney’s will create one of the greatest, most innovative companies in the world.”

In light of the revised terms contained in the amended and restated Disney Merger Agreement, 21CF’s board, after consultation with its outside legal counsel and financial advisors, has not concluded that the unsolicited proposal it received on June 13, 2018 from Comcast could reasonably be expected to result in a “Company Superior Proposal” under the Disney Merger Agreement.

However, the amended and restated Disney Merger Agreement contains no changes to the provisions relating to the Company’s directors’ ability to evaluate a competing proposal.

I want to know what you think about Disney’s increased offer to Fox.